Home > About the Cartagena Summit >

Clara Inés Vargas Silva, currently the Director of Multilateral Political Affairs in Colombia’s Ministry of Foreign Affairs, has for over 32 years served Colombia’s Ministry of Foreign Affairs and its foreign service. Her rich experience includes having worked in Bogota as Sub-Secretary of Foreign Policy, Chief of Staff, Chief of the Legal Office, Director of Consular Affairs and Communities Abroad, Director of Special Affairs, International Negotiator, and Director of Human Rights and International Humanitarian Law. She has represented Colombia at its embassies in France and Venezuela and at its missions to the United Nations and the Organisation of American States.  In addition, she has represented Colombia at the negotiations of the Rome Statute of the International Criminal Court. 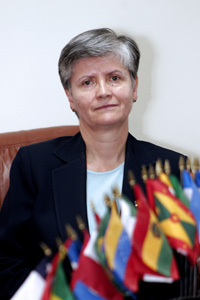